I'm embarrassed to admit that lately, I've been watching a lot of HGTV. Whenever I have programming to do that is easy but time consuming, I watch House Hunters or Designed to Sell in the background. On both shows, buyers and sellers use comparable houses to help them put a value on a house. Similarly, investors value companies based largely on how the company compares to other companies they've seen before. Wouldn't it be nice if there was some way for founders to see the valuations of other startups too?

You can start valuing your company more like an investor by seeking out comparable startups and working backward from the funding they've raised.

Here are a few example pre-money valuations of companies on CrunchBase who have received seed or angel funding within a month. Ideally, you'd look closer at the composition of the team and the progress of company; however, I've only included the team size and how long the company has been operating here. 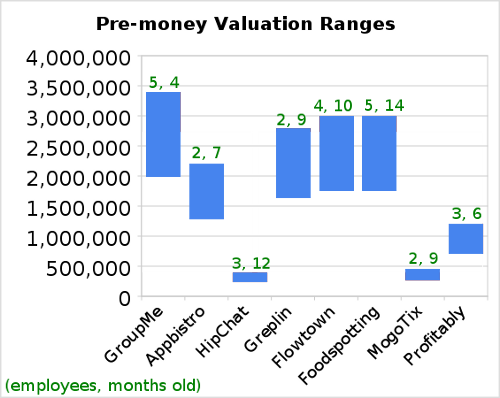